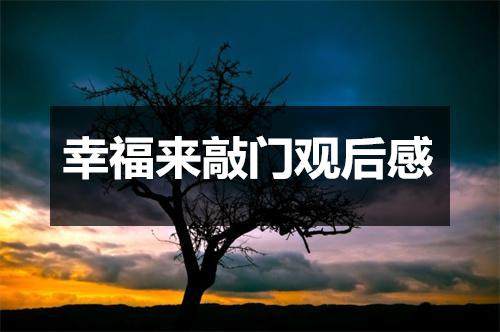 The practical significance about The pursuit of happiness

Through one-week English videos training, I have learnt a lot. Today I will show the practical significance about the pursuit of happiness.

The film tells us that the process to get the happiness is difficult, and let me know we should treasure it.

"You have a dream, you got to protect it!" the hero said to his son.From this word, I learn that one person who has a dream must live for his dream. If we can?t insist on the dream, the dream just is a day-dream, and we have no energy to life well. The word tells us that no matter how the difficulty is big, we just need to see the achievement after the difficulty, no difficulty is difficult. Like the word from Li Ning ?anything is possible?.

We can also see that as a father, must establish a good image for his child, just like the hero. He teaches his son through his action, and he never give up. The hero was born in a single parent family and he does not want his son like him, so he protects son carefully after his wife going away, and never let his son feel fear and lonely. He also encourage his son to keep his dream.

In the film, the hero does things actively. He always runs for his work and life. A view that shows he runs for his work that selling a machine, and we can imagine that what?s the result if the hero would not run for his machine. Maybe he will feel disappointed for a long time. Another view that shows his running for the sleep place, what a pity that he was too late, and the end is that he sleep in the toilet with his little son and keep the toilet door close stubbornly. So from the two views we should know that when we do anything, must be active, and if not, the bad result, just like the result in the film, would be coming ruthlessly.

The film brings us a good deal of enlightenment. With its practical significance, we will have more spirits to participate in the future work, just like the hero never gave up, and give my families happiness, then to be a better man.

After watching this film, we can also find another perspective. In America the unemployment is general. If we watch carefully, we would find that there are many unemployed people, so we can see that America is not a good country as we think. Many people have the American dream, and in their mind that if you are in America, you will be a successful man. But actually, that?s wrong. In America, you have the opportunities to be a successful man, but you must strive after a lofty ideal.

The Pursuit of Happiness

"You got a dream, you gotta protect it", a saying in this movie, is really a shock to me. It goes without saying that this movie is a special encouraging movie, in which Christopher Gardner, played by Will Smith, spared no efforts to realize his dream and never gave up. In fact, the encouraging movies are playing an important role in the market of movie in China as well as American.

Firstly, I?m willing to say some words about Will Smith, the leading role of this movie. Through the movie "I Am Legend", I start to pay attention to this actor. In the past, in my mind, he usually was the symbol of hero. However, in this movie, he became a pitiful poor man but showed us his love for his son and ambition to future. Here are some abstracts from this movie: Never had Christopher Gardner seen his father until the year when he is 28 years old, As a result, he determined to be a good father incompetently. However, just as an old saying goes, "not every thing goes well in our life", this single father lived an unfavorable life in which he experienced the unemployment and was abandoned by his wife at the same time. At last, what he owned was his son. To make his son happy, Gardner had no choice but worked hard and took every opportunity to make money. In the process of pursuing the success, he used to sell the medical equipment, stay in the prison for owing money, competed for a job without salary for six months and even lived in the WC. Under this tough circumstance where we, ordinary people, may give up just at the very beginning, he insisted on encouraging himself and get over the setbacks and barriers. Finally, all difficulties had to give in, he succeeded in accessing to a securities company and started his new life as a bottom staff. At last, he eventually became a renowned financial investor. He believed that if one person makes a good effort, happiness will come tomorrow.

After watching it, many thoughts struck to me. At the beginning of the movie, Chris saw a wrong word on the wall, and said the famous sentence: There is no ?Y? in happiness, the only thing we can do is striving for our own happiness voluntarily. Indeed, whoever you are, you have to experience some pain or failure in your life, which is not associated with your appearance, nationality or gender. Just take us, some congratulated students of UESTC, there?s no denying the fact that we are faced with much pressure coming from our parents, subjects and future prospect. However, in comparison with Chris, we have dormitories to live, have friends to share sorrow and happiness, have freedom to enjoy, do we really have qualification to complain about our life?

I ask myself when the last occasion might have been that any of these critics genuinely had to spoiler: run,

under painful, embarrassing duress, from a cab , because they didn't have the money; or when the forces of life seemed to conspire against them so unfairly that they broke down in tears. Spoiler: when your wealthy boss, who you can not disappoint, asks you to borrow the last five dollars in your wallet, and you know that that money is all you have in the world to feed your family, to pay your gas. You go through times in life when you feel that things couldn't possibly get worse and then they do and then they do again. Sometimes, (like Chris and son at the beach towards the end of the film) you just want to get away from it all, other times you cry. Sometimes, and this is rare, you laugh ,because if you don't you'll cry. You know that if you let it all become too much, you will sink to the bottom of the sea.

Personally, from now on, to be an optimistic man. Whatever happens, just like Chris said, "If you want something, go to get it, happiness will come tomorrow."